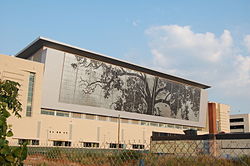 The facility is more than double the size of the older convention center that was erected in 1977, renovated in 1997, and torn down in February 2006.

The building cost $225 million to construct. A new Marriott hotel named Marriott City Center was built to provide lodging for visitors and now connects to the Convention Center.

The west-facing wall of the new convention center boasts a large public art piece called the ‘Shimmer Wall’ that contains metal plates in the form of an oak tree backed by LED lights. The oak tree represents Raleigh’s nickname, the ‘City of Oaks’. This wall was sponsored by Cree Inc., a local company that manufactures LED lights. National Agents Alliance held its NAA Leadership Conference on Sept. 11-14, 2008 and was the first convention held in the new center.

The USS Freedom remains at YELLOW ALERT due to the ongoing global pandemic. The crew continues to operate at reduced activity levels, and events and activities are still limited.